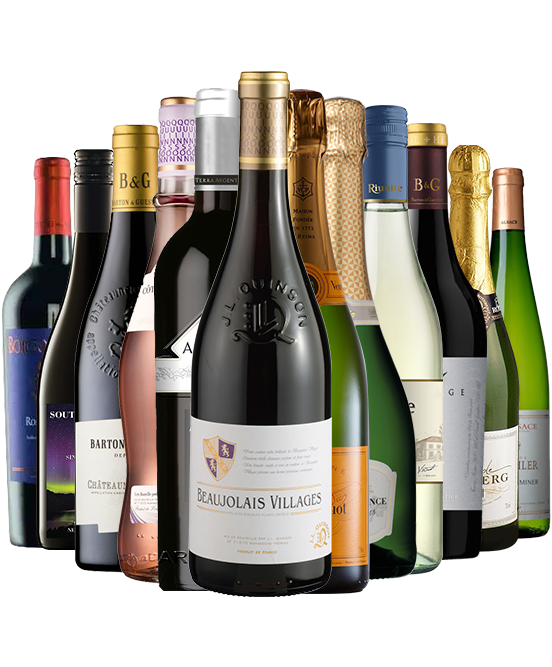 THE ULTIMATE INTERNATIONAL SELECTION, THE BEST WINES FROM EVERY CORNER OF THE GLOBE IN ONE MIX

An inky, medium-bodied, dry red wine. Strong impressions of dark fruits on the nose and the palate has a touch of vanilla. A very pleasing and easy to drink varietal.

Shiny pink with pink petal reflections. Luminous.Develops notes of mouth-watering strawberries and raspberries while also revealing light tones of exotic fruits. A well-balanced structure, full and fresh, with a lingering aromatic finish. Perfect as an aperitif, to drink with salads and grilled food. Consistently pleasant throughout the meal.

A Champagne from the fuller-bodied school with flavours of buttered toast, brioche and biscuit to complement the ever present fine acidity and flavour length that is a trademark.

This dark red coloured blend with violet highlights has a rich nose developing black fruit aromas and spices. On the second nose, violet notes appear. A wine with harmonious structure and balance, mixing flavours of fruits with toasty vanilla hints.

Nice pale-yellow colour with hints of green. Fine and persistent foam.  Fruity, delicate, with aromas of peach, apple and pear. Fresh and lively attack, round on the middle palate. The aftertaste is long with fruity and floral notes. Easy drinking wine, fresh and pleasant. Very good as an aperitif.

This cool climate example of the varietal is all bodied and displays vibrant purple red hues. It is well stricter, showing great fruit depth balanced with a structured influence of oak and presenting fine integrated tannins.

The colour is intense, yellow with light golden highlights. The pinkish colour of the grapes naturally influences that of the wine. It is a true aromatic palette, rich and exuberant, which characterises the Gewurztraminer. The bouquet is powerful and complex. It is an explosion of exotic fruits (lychees, passion fruit, pineapple, mangoes), flowers (especially rose), citrus fruits and spices. An ample and suave material reveals all the exuberance and the complexity of this wine of character. Its dense weave is harmoniously supported by a freshness that is nevertheless more discreet than for the other Wines of Alsace. In the mouth as in the nose, a festival of exotic aromas delights the palate.

Intense straw yellow colour. Sweet and aromatic with notes of honey and citrus fruits. The palate is delicate and pleasantly sweet.

"This is a silky, ready to-drink red. Cherry and plum fruit mingle easily with earth, leather and mocha, finishing on a softly dusty note. Drink now-2023"

"Light, bright yellow colour. Subdued bouquet with a nice toasty bread character, the palate light and lean-ish, with a clean dry finish and aftertaste. Some nice complexity, and fresh acidity to finish. A very enjoyable wine."

"Perfume is actually very attractive, very complex, you can see the detail, mix of floral, nuttiness, brioche  complex, gently sweet but shifting into savoury with a squeeze of citrus through too. Light and creamy in texture, but with enough pep and freshness to encourage drinking. Sweetness is here, builds with a gently cloy, but it fits with briskness of fizz, smoothness of bead and drinkability. Finishes with a briny freshness. Easy going."

"Sensations: exceptional richness, this wine reveals itself as dense and full-bodied - the essence of morello cherry pulp, blackberry and grape. A sublime concentration but the taste is soft and supple; very admirable and harmonious... A pure wine, well balanced with hints of spice, the juicy fruit has exceptional expressive power. One of the best red wines of the year, hats off."

With its richness of extract and its pleasant drink the "Corte al Passo" is a real treat! It enchants the eyes with its intense garnet red and seduces the nose with its scent of berries, cherries and spices. On the palate this Sangiovese with the addition of a small percentage of Merlot grapes is straightforward and enveloping, with sweetish aromas that recall those of the bouquet and which are accompanied by hints of chocolate and aromatic herbs. A soft tannin and a harmonious finish complete the profile

Hand-picked grapes selected following a rigorous selection process. No pressing or breaking of bunches. Fermentation of full bunches for 6-8 days. This technique provides the distinct aromas of this nouveau wine. This is followed by traditional red-wine vinification.

Machine harvest. The basic wine is fermented at a low temperature. The second fermentation takes place in tanks for 2 weeks at 14° C and is then followed by dosing.

Barton & Guestier has this year again well adapted its skillful winemaking techniques to the 1999 vintage specifications. This consisted of pushing the extraction to the extreme on the Grenache. The Syrah gave richness, flavors (spices, cherry) and structure. The wine has aged slowly for a period of nine months gaining maturity. The result is a rich wine, intense in color, very aromatic with good structure.

Veuve Clicquot Yellow Label is one of the most popular and recognisable Champagnes throughout the world. With its distinctive yellow label, Veuve Clicquot is the enduring homage to the great Madame Barbe-Nicole Clicquot. Under Madame Clicquot's guidance, this famous Champagne house became a global phenomenon and a continued success story.

Following the pioneering spirit of our founders, with almost 3 centuries of experience and to celebrate B&G's 290th anniversary, our oenologists, led by Laurent Prada, have created Héritage with a total freedom of grapes, terroirs and vintage.For almost 300 years, our know-how has been to vinify, age and ship wines worldwide. 300 years ago, these wines were those produced at Margaux, Lafite, Haut Brion,... The most important people were the winemakers, but the cellar masters were adding their final touch to the wine and Barton & Guestier cellar master, Germain Rambaud, was shaping the best wines of the 18th century.In 2015, inspired by the pioneering spirit of our founders, we are producing the first ultimate wine brand: Héritage by Barton & Guestier. Héritage by Barton & Guestier, a promise of excellence whatever the varietals, the terroirs, the vintage,  If Héritage was only the beginning of the story?

Southern Lights Syrah is sourced from an established vineyard in Marlborough’s Souther Valley region. Created with minimal intervention, handpicked and patiently aged for 18 months in 50% are French oak.

The vineyards are located in the Alsace region on the border of France with Germany. Cold climate and the influences of the Vijay ridges, with the addition of badger and mineral lands, are perfect for the aromatic Alsace species.

The Nistri family are Sangiovese specialists and Corte Al Passo is a wine made in the ancient 'Governo’ style; meaning that a small proportion of the grapes are dried before being added to the wine in November - just like Amarone.

Two collections are made; the first occurs in the first week of September, the other in the second decade of October in order to increase the sugars and make a slight overripe.

The grapes are carefully de-stemmed in modern stainless steel tanks, with maceration on the skins for an average duration of 25-30 days at a temperature of about 26 ° C. It ages in second-cycle barriques for 6 months and a further 6- month aging in bottle.

Located at an altitude of 300 meters s.l.m. with south / west exposure. Vineyards of new and old plant with an average density of 5,000 plants per hectare.

After a soft pressing, the must is quickly separated from the skins. Fermentation at 38-40°F is followed by preservation in thermo-conditioned vats. A second fermentation of several weeks’ length elicits the slight sparkle. Isobaric bottling.

PRODUCER FROM BORDEAUX NEIGHBOURING SOME OF FRANCE'S BIGGEST NAMES

WORLD CLASS. THE BEST VALUE FOR MONEY ARGENTINIAN MALBEC WE HAVE EVER SOLD! 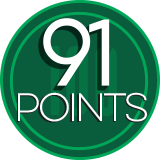