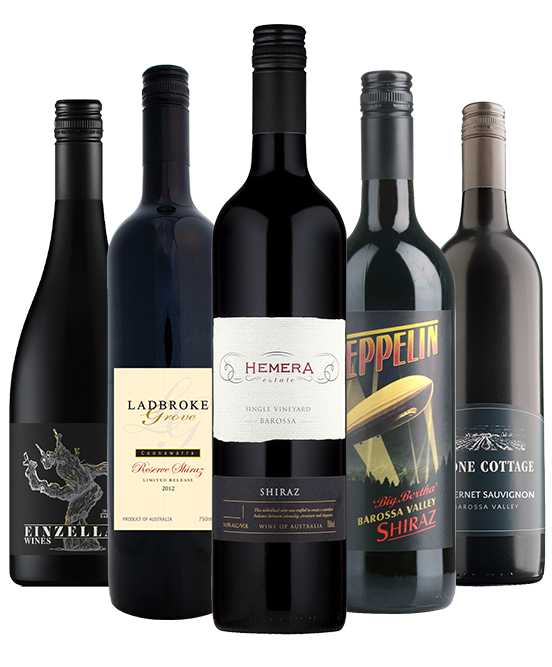 This elegant wine has ripe fruit characters with spicy and generous rich red berry flavours. The wine exhibits balanced supple tannins with an impressive palate and with careful cellaring should develop over the next 7-10 years.

Dark inky red in colour. The nose is rich in blackcurrant, chocolate with hints of aniseed. Typical Barossa Valley Cabernet Sauvignon, full bodied and slightly chewy, the palate has flavours of ripe blackcurrant infused with cedary tobacco characters and spice

A glass staining ruby purple in colour this wine leaps from the glass with clove spice, perfumed blue and black fruits and a hint of vanillin cream. The palate shows full ripe and dense black fruits with lighter cream and blueberry crumble characters. The ripe, textured tannins provide ample framework for the fruit and along with the fine oak influence ensure a long and structured finish redolent of dark chocolate and darker fruit.

Lovely purple colour with red hue. A bright, red cherry, blueberry and cranberry packed nose. Light to medium bodied the bouquet doesn’t let you down as your met with overwhelming fruit flavours of blueberry and cherry, its back with some herbal notes and finishing with soft tannin which round everything up provided a wine only describable as beautifully pretty.

Crushed and destemmed, open-fermented, matured in new and used oak for 18 months, a barrel selection. A traditional full-bodied Barossa Valley shiraz layered with black fruits; a substantial oak contribution, but the tannins are soft and supple.

At the International Wine Challenge, The Hemera Shiraz outclassed the following

Selected from premium parcels of fruit this classic Coonawarra Shiraz has benefited from extended maturation in new French oak hogsheads for 22 months.

Zeppelin was created by Artisan of the Barossa winemakers Corey Ryan and Kym Teusner, with a view to crafting hearty wines exhibiting a ample style and considerable personality. Labelled in commemoration of the region’s founding German heritage, the brand was named in honour of Count Ferdinand von Zeppelin, an innovator, brave and progressive entrepreneur who thought big, really big and was not afraid to risk it all. The influence of the German migrants that settled the Barossa Valley is seen today in a rich and diverse culture enjoyed by a myriad of family wineries whose names proudly proclaim their heritage.

The 2014 Vintage saw the hottest summer recorded in South Australia. With 13 days reaching 40 degrees or above and normally followed by strong winds at night. This resulted in lower crops than the average and early ripening across most varieties. After the heat, a rain event caused the most February rain for 30 years, providing beneficial moisture and berry flavour to develop alongside sugar formation. The resultant wines are abundant in fruit with elegant mouth-feel.

Selected parcels of some of the best fruit were earmarked early on for this Shiraz. Sourced both from our own Estate blocks as well as very special local growers these vineyards showcase the a seamless and fine blend of Shiraz in the trademark Hemera Estate elegant house style.

Once the grapes have been identified to be of optimum ripeness the parcels are brought into the winery where they are gently crushed into the open top fermenters. After pressing, the free-run and pressed wine are combined based on taste before being transferred into a combination of new and seasoned French and American oak barrels for 18 months of maturation. Each parcel is kept separate throughout matura- tion with careful barrel selection taking place before the final wine is blended.

Sourced From One Of Barossa Valleys Most Revered Growers from a single vineyard located on the outskirts of Tanunda on the Valley Floor from a vineyard which just celebrated its 100th birthday. Fruit was picked in early hours of morning when temperatures were at their lowest for the day to ensure fruit remained crisp whilst being transported to winery. The grapes were destalked and placed uncrushed into small stainless steel open top fermenters. Cultured yeast was used to start fermentation and the tanks were hand plunged spending 7 days on skins at 26 degrees. The skins we gently pressed and we kept the wine in tank to create a virgin style of Grenache to retain fleshy fruit flavours then bottled with minimal filtration and no fining.